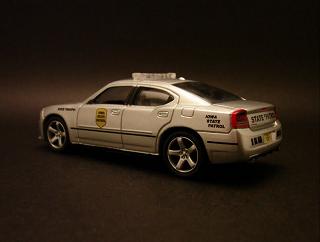 If it seems like you’re seeing more state troopers on Iowa’s roads lately, you are, and that’s the point — to make them seen.

About 40 unmarked Iowa State Patrol cars are being taken out of stealth mode, with yellow shield decals being added to the doors, light bars on the roofs and “STATE PATROL” on the trunks.

“If people see law enforcement out there, their driving behaviors will change,” Sergeant Bright says. “Unmarked vehicles are a great tool for us. We get some high speeds out there, we see a lot of things that people are doing while they’re driving that they shouldn’t be. With more visibility out there, maybe some of this stuff will not happen like it has been, with the speeds, with texting and driving.”

There are about 360 state patrol cars in the fleet and 70 had been unmarked. Over the next few weeks, Bright says the number of unmarked cars will be cut to around 30.

“The cars are just being called in to our supply,” Bright says. “The decals are added onto the doors, the back and the trunk area and the light bars are added. It’s actually a pretty quick process.”

Bright did not know how much the conversion will cost but says the cost in potential lives saved is priceless.

“We’re just changing the markings on the cars,” he says. “It’s not an addition of troopers that you’re going to be seeing out there, it’ll just be more vehicles that will be more visible to the motoring public.”

The state patrol fleet has a combination of Ford Crown Victorias and Chrysler Chargers.