You are here: Home / Business / Survey finds 30% of Iowans have no plan to pay off holiday debts 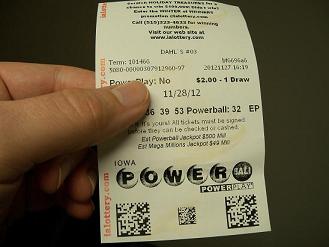 Hoping you’ll win the lottery is not a practical way to pay off debts.

Bills are starting to arrive in our mailboxes from holiday shopping sprees and a survey finds some Iowans seriously need to reign in their spending.

More than 900 Iowa consumers responded to the survey from the Iowa Credit Union League which found almost 30% said they have no firm plan to pay off the new debt.

Emily Caropreso, the league’s director of marketing and communications, says it’s more important to make a budget and stick to it, while setting aside savings for unexpected expenses.

“We really advocate for folks to spend responsibly and have a plan in place so that they’re not spending more than what they’ve earned or saved throughout the year,” she says.

Debts can mount quickly with monthly interest fees, so Caropreso says it makes a lot of sense to wipe out the balance as quickly as possible.

“Pay it off all at once, if they’re able to, so when they get their credit card bill, just write a check back and pay it off in full so it helps save them in the long run on the monthly interest fees,” Caropreso says.

If that’s not an option, at least make the payments in installments, as many do: “Out of our survey, 13% of Iowans said they’d be paying it off in one to two months and 8.9% said in three to six months.”

Creating a payment plan will save hundreds, possibly thousands, in interest charges compared to only paying the minimum.

The survey found 6% of the Iowans questioned say they’ll use their tax refund checks to pay off their holiday bills.

“Although you’re not able to count on your tax refund every year, if you think you have one coming your way, this might be a good way to pay off your holiday debt all in one chunk,” Caropreso says. “That way you can have that paid off and start saving up for your fun for the next holiday season.”

Another option is the holiday savings account. You can set up a payroll deduction of $25 a month in January and by November 1st, you’ll have $250 saved.