You are here: Home / News / Anderson launches 2014 campaign for Secretary of State (AUDIO) 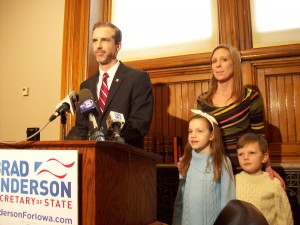 “Today marks the first step in a long, but important campaign,” Anderson said during a statehouse news conference. “…We take our right to vote seriously. We help pick American presidents and we even invented the computer, but recently too many eligible voters have been intimidated, our state’s technology has gone dormant and our tax dollars have been wasted on fruitless investigations. We can and must do better, which is why I’ve made the decision to run for Iowa Secretary of State.”

The secretary of state is Iowa’s top election official. Current Secretary of State Matt Schultz, a Republican, was first elected in 2010 and in the past year Schultz has led an effort to review voter registration records to check for ineligible voters, like felons or illegal immigrants. Anderson calls that “offensive” voter intimidation. Anderson suggests an already-existing electronic system that verifies a voter identity at the polls would be a cheaper option.

“A better way to prevent fraud than voter I.D. and doesn’t disenfranchise a single voter,” Anderson said, as he rapped the lectern with his knuckles to make his point.

It is 662 days until the 2014 General Election, but Anderson told reporters he’s launching his campaign early on the advice of people like former Governor Tom Vilsack and Senator Tom Harkin.

Anderson’s also aims to tap into the network of volunteers who worked on Obama’s 2012 campaign, some of whom are among the nearly 50 members of a steering committee Anderson has assembled for his campaign. Other high-profile Democrats like former Iowa Attorney General Bonnie Campbell, Congressman Bruce Braley and former Governor Chet Culver are part of Anderson’s advisory group. Anderson worked as Culver’s communications director in the first year of Culver’s term.

Anderson also worked on the 2004 campaign of John Edwards and for Obama’s 2008 General Election campaign in Iowa. A reporter asked Anderson if he expects Obama to endorse his candidacy.

“I would not reject it,” Anderson said, with a laugh.

Anderson currently works as a political consultant for a Des Moines firm that works on campaigns throughout the country and in other countries as well.