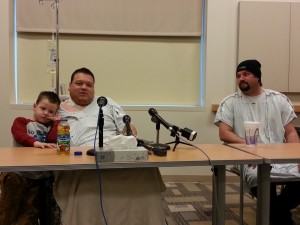 One of the donors, 38-year-old Mike Dodge of Mason City, said he simply wanted to help another person get healthy. “You’ve got two (kidneys), so you can share your spare,” Dodge told reporters at a news conference today at Mercy Medical Center.

Dodge said he previously donated bone marrow and stem cells to a young man in Pittsburgh and started getting serious about donating a kidney a year ago. “If you ask anyone who knows me, it’s just what I do. If you need something, I’ll give it to you,” Dodge said. “I’m the guy who will show up and help you carry your couch up six floors if you need it. If you get stuck in the ditch, I’ll come get you. That’s just kind of what you do. I just always think you should help when you can.”

Dodge, a single father of two kids, said he might not be done donating body parts. “I’ve talked about the liver, but that’s a little ways down the road. That grows back, so if that’s a possibility I’d like to do the liver,” Dodge said. “After that, I think I’m done. You can do one lobe of your lung, but I think that’s going a little too far for me.” 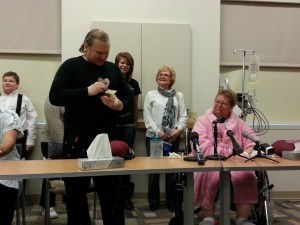 Another donor, 46-year-old Peter March of Omaha, had hoped to help his wife, Nerissa, who needed a transplant. While they were incompatible, March was able to give a kidney to Dawn Inman of Carroll.

March recalled his surgery, which took place on Tuesday. “Going in, it was kind of exciting. It was like a Disney ride or something like that,” March said to laughter from doctors, nurses and other hospital staff. “When I woke up, it was like, party! I was calling everybody on my cell phone. I called my work, saying ‘hey, it’s great. It’s all over with and I’m okay.’ It’s no big deal. I think more people should do this type of thing and not be afraid of it.”

A short time later, the recipient of March’s kidney – Dawn Inman – was wheeled into the room. “They said I was blessed because your kidney was larger than usual,” Inman told March. “The doctor said it took two hands and it was way in the back. So, sorry about that doctor,” March said to another outburst of laughter.

The 37-year-old Inman, who was joined by her mother and children, wasn’t sure how to thank March. “There aren’t enough words…I don’t really know what to say because nothing seems adequate enough,” Inman said.

Following her release from the hospital, Inman said she plans to take a trip with her kids and family to Disney World. She spent nearly five years on dialysis, which was especially difficult for Inman to endure following nearly a lifetime of health problems.

Aside from the vacation, Inman said she’s looking forward to the little things in life that she’ll once again be able to do. “Being able to go home and have the energy to clean the house and do the dishes,” Inman said. “I mean, most of the time I got home and the first thing I’d do is go to bed. My stepson, who is 18, would pop his head in the door and say, ‘are you okay? do you need anything?’ He kind of took on the responsibility of making sure I was okay. And that was a guilt in itself to know my 18-old-year thought he had to take care of me. So, now I’m in the position where I’m going to be able to take care of (my kids) again.”

The chain of donations started with a Des Moines man, 30-year-old Tyler Weig, who chose to give one of his kidneys to a stranger, Lance Beyer of Pella. Beyer’s wife, Julie, then donated a kidney to Jay Lindahl of Ames. Mike Dodge, an acquaintance of Lindahl, donated his kidney to Nick Titus. Titus’ aunt, Mary Sleeth of Chariton, donated a kidney to Nerissa March. None of the kidney recipients knew his or her donor, but four of the donors were family or friends of recipients in the chain.

AUDIO – Peter March reads a letter written to him by Inman’s mother, Donita Eickholt of Roland (2:43)