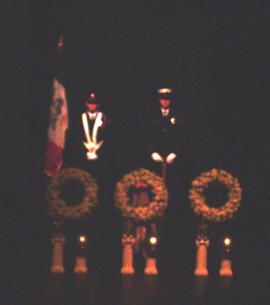 About a thousand people turned out Thursday afternoon at North Iowa Community College in Mason City for a memorial service for the three victims of last week’s medical helicopter crash.

Joseph Ferrell, of the Iowa Bureau of Emergency Management Services, says the emergency responder community is in mourning for the three lost lives.

Ferrell says they don’t think of something like this happening to members of their own EMS family, especially when they are trying to help someone. He says in circumstances like this, they are great about coming together and leaning on one another, because people still need their services.

Mercy Medical Center-North Iowa CEO Dan Varnum just started his position recently in Mason City and says he didn’t get to know the three victims as much as he’d have liked, but he’s heard a number of great stories from others. 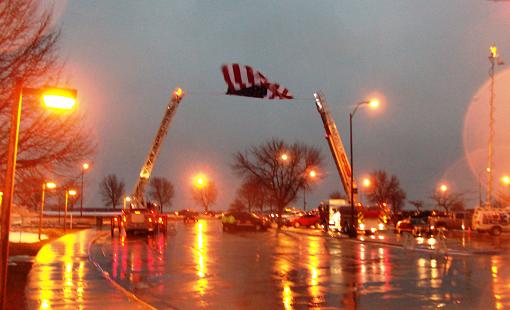 A giant American flag is suspended from two fire truck ladders outside the memorial service.

Varnum says: “Shell was a take-charge person with a passion and a steadfast focus to take the situation at hand. Russ was a fun-loving man with a sense of humor and a motivation to serve, and Gene was an intelligent individual who was very deliberate in his approach to things and was looking forward to the new role of being a husband in the near future.”

Varnum says the victims had a tremendous impact on many people through their years of service.

He says when he thinks of the work they’ve done over the years, about the lives they’ve saved and the impact of those lives on others. He says they’ve touched people in ways that most of us can’t even begin to imagine.

Fred Buttrell is CEO of Med-Trans Corporation, the company that provides helicopter service to Mercy-North Iowa. He says he’s witnessed relentless efforts and compassion by family, friends, and co-workers during this tragic time.

Buttrell says: “The spirit of North Iowa is alive and well just like the spirit that abides in this room. To the Mercy family, you’re a special organization. You’ve been confronted with an untimely tragedy, the collective faith in God and servitude has helped sustain us all. As a fellow aviator, the only comfort that I can get out of this is that Gene, Russ, and Shell loved to fly.”

Dan Dwyer is the senior vice president of mission integration with Trinity Health, Mercy’s parent company. He says the work of emergency health care can be a blessing and a challenge to all as shown with this tragedy.

Dwyer says, “These three persons, these three souls, I think have invited us to remember how profoundly sacred this work is. In the midst of the darkness that we may be feeling and the confusion about what this all means and what we’re going to do with this loss, maybe they’re inviting us to see some light in the darkness, the kind of light that’s like a beam of love, waking up our lives, enlightening our lives in so many different ways.”

The cause of the crash has not been determined.