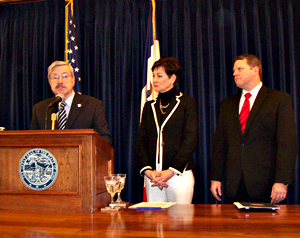 Governor Branstad today unveiled a series of what he called “refined” proposals to reform the state’s K-12 schools.

It includes raising beginning teacher pay to $35,000 and providing more money to teachers who take on more responsibility to be a mentor to others.

“There’s been a recognition for some time that we needed to make some significant changes and we need to have better opportunities for teachers to gain recognition and to be able to improve their skills and to transform the teaching profession,” Branstad said today during his weekly news conference.

While the plan doesn’t directly link teacher pay to student test scores, it does call for incorporating the performance of a teacher’s class or a principal’s entire school in annual evaluations.

The governor proposes providing up to $20,000 in tuition grants to college students who pledge to teach in Iowa for five years. The plan calls for first-year teachers to have both a mentor and a lighter course-load — similar to the “residency” required for medical doctors. Both Governor Branstad and Lieutenant Governor Kim Reynolds have daughters who are teachers.

“The bottom line?” Reynolds asked this morning. “We want all Iowa students to graduate from high school college or career ready.”

The entire package would be phased-in over five years and, in the fifth year, would require $187 million more dollars in state spending. In the first year, it will require spending just $14 million, according to the governor.

“This is our opportunity for transformational education reform,” Branstad said. “It’s not something that’s going to happen overnight, but I think this is a very thoughtful, systematic approach.”

Another proposal included in the reform package calls for boosting a current state program that provides on-line classes in advanced science and math classes. There currently are long waiting lists from high schoolers hoping to take the courses, because those classes aren’t being taught in their local district.

“It’s now our turn to move Iowa schools further along the path to greatness,” Glass said. “Let us not fail in this moment of tremendous opportunity.”

According to Glass, legislators need to rework a long-standing grant program that finances literacy classes in schools, to incorporate some of the requirements laid out in a law passed last year that calls for ensuring third graders can read at their grade level before they move on to fourth grade.