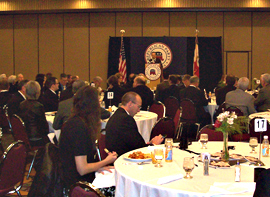 Republicans met today in a fundraiser breakfast before the start of the legislative session.

Republican legislative leaders who spoke early this morning at an Iowa GOP fundraising breakfast promised they’ll push to cut taxes in 2013, but it was only Governor Terry Branstad who spoke specifically about which taxes he’d like to see cut.

“Indeed, we need to reduce the tax burden for all classes of property to make the state even more competitive in the future — and you’ll hear more about that tomorrow.”

Branstad is scheduled to deliver his annual “Condition of the State” Address on Tuesday. Branstad warned Republican lawmakers they’ll be pressured to spend more, which would curb their ability to cut taxes.

“There’s all the people that want something from government that are there and you’re hearing ’em and you will hear ’em every day of this session, wanting more and more,” Branstad said. “But it’s important to remember we got this surplus because we had the fiscal discipline.”

House Speaker Kraig Paulsen of Hiawatha, the top Republican in the legislature, spoke directly to Iowa taxpayers early this morning, making this promise: “It’s time to get to work (and) find ways to protect your dollars, find ways to send it back to you.”

“In all honesty, as I think back about the election I bet there are some in this room who are a little bit frustrated yet about the election and maybe even a little bit, tiny bit depressed about the results of this election cycle,” Upmeyer said. “But one thing we can’t lose sight of and we need to always remember is the fact the Republicans remain in the majority this year in the Iowa House and we will continue to set the agenda.”

But Republicans fell short of their goal of winning control of the Iowa Senate. Senate Republican Leader Bill Dix of Shell Rock was elected to the post after the November election.

“You all can do the math. We’re a couple of votes short of getting that done all on our own,” Dix said. “But I know with the leadership of the House and Governor Branstad, I have to believe that as we work to get that job done that we’re going to find a way to change the hearts and minds of a couple of other people along the way in the Senate ranks.”

Steve Scheffler of the Iowa Faith and Freedom Coalition — a member of the Iowa Republican Party’s state central committee — delivered an opening prayer for the Iowa GOP fundraiser.

“Lord today we pray for our elected officials from Governor Branstad to all of our statewide elected officials to Senator Grassley to Congressman King and Latham and, yes, even President Obama, for they need guidance,” Scheffler prayed.

Most of those who attended this morning’s GOP breakfast were legislators and the Iowa Republican Party’s co-chairman urged the lawmakers to donate at least $500 to the state party. Last year the party donated $500 to each Republican House candidate on the November 2012 ballot.