You are here: Home / News / New restrictions proposed for teen drivers in Iowa 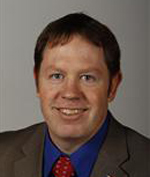 The chairman of a key senate committee says teenagers with a learner’s permit need to have a full year of driving with a parent or guardian in the car before they graduate to a license to drive alone.

Senator Tod Bowman, a Democrat from Maquoketa, is chairman of the Senate Transportation Committee.

“Currently, we have a six-month requirement for the permit and I have a 16-year-old son who just went through this process,” says Bowman, “and what they don’t get is the opportunity to drive with an adult, a parent, through all seasons of weather.”

The day after last month’s blizzard, Bowman sat in the passenger seat as his 16-year-old son drove.

“My son had already had his license, but he hadn’t driven in any of that, so we went out together driving, talking about down hill stop signs,” Bowman says. “We went to a parking lot and I tried to get him to put the brakes on fast so he would slide and feel how you’ve got to pump the brakes — all that stuff that you just don’t get in driver’s ed because if you don’t take driver’s ed at the right time of year, you get none of that.”

Not only should teens have a full year of adult supervision before they’re allowed to get a driver’s license, Bowman wants to change Iowa law to restrict who can be a passenger in a teen’s vehicle during the first six months they have that “intermediate” driving license.

Siblings still would be allowed in the passenger seats, but no more than one teenager who is not a relative. Bowman says the data shows the more teenager passengers piled into a car, the higher the chance of an accident.

“If you’ve got a bunch of teenagers in there, turning the music up, having 20 different conversations, leads to that distraction,” Bowman says.

Similar legislation passed the Iowa Senate two years ago, but never considered in the Iowa House. Under current Iowa law, teenagers can get a driver’s permit at the age of 14. Teens can get an “intermediate” driver’s license at age 16, after they’ve driven at least six months with an adult in the car.