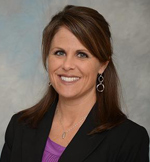 Iowans who are parents of newborns are encouraged to take their tots in for a free eye exam as part of a national effort. Dr. Melissa Billings, an optometrist in Urbandale, recommends children have their eyes checked when they’re still very young — between the ages of six and 12 months.

Dr. Billings says, “We’ve found that if we can catch early problems, we can get them treated early and that way the patient doesn’t have to deal with a lifetime of visual problems, whether that would be a lazy eye, where one eye doesn’t see as well as the other, an eye that turns, poor depth perception.”

While it might sound like it would be pretty tough to check the eyesight of an infant, she says the test is tailored just for the very young. “We do a lot of things such as preferential looking to see if they’re looking at specific targets,” Billings says.

“We always check their eye motility to make sure the six muscles in each eye are working fully and properly. We can also test their prescription without them saying anything at all by doing a technique called retinoscopy.” The typical Infant exam has the baby seated on the parent’s lap and the doctor will use lights and other hand-held objects, similar to finger puppets, to evaluate how the baby’s eyes are working together.

She says most eye doctors are taking part in the free program. “If you go to the website www.infantsee.org, that will pull up the InfantSEE website and give you a list of providers,” Billings says.

“I have a feeling though that if anybody talks to their hometown provider, their provider is probably an InfantSEE provider.” She says early intervention in a child’s first 12 months is crucial to successful and cost-effective treatment because an infant’s visual system develops very rapidly and it’s important to treat any problem that could hinder proper vision.