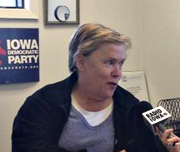 The head of the Iowa Democratic Party will walk in Monday’s Inaugural Parade in Washington, D.C.

Some party activists like to knock on doors or put up yard signs, but Iowa Democratic Party chairwoman Sue Dvorsky has a passion for parades.

“I love parades. I’m a queen at chanting in parades. I always have been, so when this opportunity came up as a way to sort of put a bow on this whole experience, I could not have been more excited,” Dvorsky told Radio Iowa.

Dvorsky has been the Iowa Democratic Party’s chairwoman since June of 2010. Her last day at the party’s helm will be Saturday, January 26, when party leaders choose her successor. Dvorsky’s task in the parade will be to carry the Iowa banner.

“I don’t have anything to do but put on a black dress coat and try not to trip,” Dvorsky said, laughing. “It’s the kids that are behind me who are really ‘the thing.'”

The Isiserettes Drill and Drum Corp from Des Moines will be marching right behind Dvorsky.

“These kids are just amazing and they’re amazing ambassadors for this state. They always have been,” Dvorsky says. “They have got a real relationship with the president, you know, starting back at the (2007) Harkin Steak Fry, the famous (scene) of 3000 of us walking in there in blue t-shirts. They have performed for him before. They were invited to the first (Obama) inaugural.”

Four years ago, the president did a little dance when he spotted the Isiserettes in the 2009 parade. (Watch the video; the drill team is misidentified in the graphic on screen.) Dvorsky doesn’t plan to try to call attention to herself during Monday’s parade.

“As has been the case in many of these events over these past two and a half years that I have had so much privilege (as party chair), I just don’t want to make a fool of myself,” Dvorsky says, with a smile, “so I just want to try to be kind of cool.”

Dvorsky has watched inaugural parades since she was a little girl.

“The first one I remember watching is Kennedy’s on our very, very huge TV cabinet with a very, very small screen,” Dvorsky said.

Now Dvorsky will be seen on TV screens of all sizes as she walks the parade route, from the U.S. Capitol to the White House. Dvorsky was in D.C. four years ago to watch President Obama take the oath of office, but she missed the parade because the logistics made seeing both impossible.

Dvorsky’s husband, state Senator Bob Dvorsky of Coralville, and one of their daughters will be along for this year’s trip.