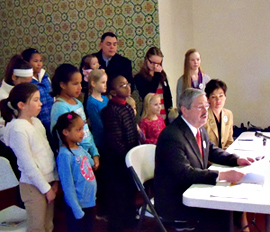 The state celebration of the Martin Luther King Junior holiday took place today in the chapel of the Fort Des Moines Museum and Education Center.

Governor Terry Branstad read a proclamation making note of the importance of the day.

“Now therefore, I Terry E. Branstad, Governor of the state of Iowa, do hereby proclaim January 21st, 2013 as Dr. Martin Luther King Day. And the period of January 20th through the 26th as Martin Luther King Junior week. I have signed it and the seal is affixed,” Branstad said as he read the last lines of the document.

Several hundred people packed into the chapel for the event and Branstad talked about how Iowans can carry forward King’s ideals.

“Understanding and tolerance are two of the lead ideals that Dr. Martin Luther King strived to promote while fighting for Civil Rights. These ideals are not lost on us today. I believe that they can just be learned and understood when just seeking to help fellow Iowans by being a volunteer,” Branstad said. 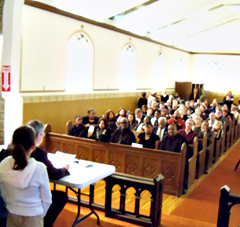 The Martin Luther King Jr. celebration was held in the chapel of the Fort Des Moines Museum.

The governor noted that Iowans can do more to help others.

“This state right now ranks third in the nation in volunterism. I want us to be number one,” Branstad said. “So we’re gonna have to continue to work and encourage people to give more of their time and talent and resources.”

He said volunteering will allow people to expand their knowledge of others.

“The only way to make our communities stronger is to have our citizens be more actively involved. Volunteering is just one way that Iowans can learn about diversity, and about the many cultures that we have in our state today,” Branstad said.