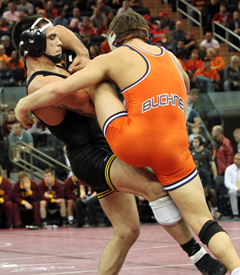 It’s time for another “border brawl” as the fourth-ranked Iowa Hawkeyes take on third-ranked Minnesota in college wrestling Saturday. Both the Hawks and Gophers have nine ranked wrestlers. The teams split their two meetings last season.

Iowa junior Tony Ramos, who’s 15-0 and ranked 2nd at 133 pounds, says the Hawkeyes are up for the challenge. “It’s a big rivalry. We beat ’em last year, but when it came to the National Duals, they got the better of us there,” Ramos said. “It’s something we need to rebound from and improve on. It’s exciting for us and exciting for the fans to see where we’re at…you know, it’s time to go out and make a statement.”

Ramos is scheduled to face 6th-ranked Chris Dardanes, a sophmore with a record of 12-2. “He’s a tough guy. He’s a competitor and he’s going to come out ready to fight,” Ramos said. “That’s something I’m prepared for.”

Iowa is 14-1 in duals this season, while Minnesota is 11-1. Both teams’ lone losses came against Oklahoma State. The dual between Iowa and Minnesota is set for 3 p.m. Saturday at Williams Arena in Minneapolis and will be televised live on the Big Ten Network.