You are here: Home / News / Senator Tom Harkin: “It’s time for me to step aside.” 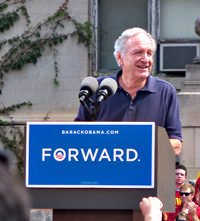 Senator Tom Harkin in August at a campaign rally for President Obama on the Iowa State University campus..

Senator Tom Harkin says “it’s not easy to walk away,” but he has decided not to seek reelection in 2014.

Harkin made his decision public this morning. Some members of the Iowa Democratic Party’s state central committee had tears rolling down their cheeks as Harkin spoke at their meeting in Des Moines.

“I’m not quitting today. This is not a time for legacy talks or anything like this,” Harkin said. “It’s a time for looking ahead. It’s a time for all of us, now, to renew our vigor, to make sure that we find the best candidate possible.”

During an interview with Radio Iowa a few minutes later, Harkin said he’s been thinking about retiring since the last election.

“I’m 73. By the time I run I’d be 75. By the end of this term I will have been the House and Senate for 40 years,” Harkin said, “and I can’t tell you how grateful I am to my fellow Iowans for giving me this opportunity for 40 years, but it’s now somebody else’s turn.”

Harkin’s announcement stunned many in his own party, including out-going Iowa Democratic Party chair Sue Dvorsky.

“It’s a little earthquaky,” Dvorsky said, “…We were surprised.”

According to Harkin, now is the time to make the announcement, so other Democrats can step forward, start raising money and assembling a campaign.

Iowa will now have one of most hotly-contested senate races in the country in 2014, as Republicans target the seat for pick-up. Harkin will not endorse a Democrat successor.

“I don’t think that it’s my job to try to pick somebody. That’s up to the Democrats to do,” Harkin said. “…I hope the Democrats pick a smart, savvy, pragmatic person to run. We’ll see who emerges.”

Congressman Bruce Braley of Waterloo and former Iowa Governor Tom Vilsack are two names which have already emerged as potential candidates on the Democratic side. Republican Congressman Steve King of Kiron in November said he wouldn’t rule out the idea of running against Harkin in 2014.

In remarks to his fellow Democrats this morning, Harkin stressed that he will remain in the senate for two more years, but Harkin acknowledged retirement had been “in the back of (his) mind” since the last election.

“I’m very fortunate to be able to be able to leave the senate on these terms. It’s not a health reason. I’m perfectly health, so far. I have no fear of losing an election. I expect to have a tough race, what the heck, but I think I can raise the money and organize a successful campaign in Iowa,” Harkin said, speaking in the present rather than the past tense about a 2014 campaign, before returning to the subject of his exit from the senate. “It’s just time. I wish I could put it more profoundly than that. I just sense that it’s time.”

Harkin has promised his wife, Ruth, that they’ll do some of the things they’ve been unable to do because of his work schedule. At the top of the list: dancing lessons.

“We’ve been married 45 years. She’s been on my case for about 40 of those years, at least, to take dancing lessons and she’s great. She’s great at music and all that kind of stuff but I never have been and we’ve talked about it and, well, I’m not saying I couldn’t have done it, but I always had an excuse not to do it,” Harkin said, with a laugh. “So now, Ruth and I are going to take some dancing lessons.”