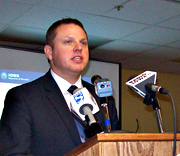 Iowa Department of Education director Jason Glass says schools would get an extra $314 per pupil under the plan.

“Providing a number of professional opportunities for highly-capable educators and fundamentally changing the nature of professional learning in every single school in our state,” Glass says.

Some of the money would be used to give bonuses to about 25 percent of Iowa school teachers who would agree to be mentors or coaches for other teachers. Teachers, parents and school administrators would choose which teachers get the bonuses and the bonuses would be handed out once a year.

“What we’re attempting to do with this legislation is establish a minimum of how this system operates statewide,” Glass says, “but also allow lots of customization and flexibility locally.”

Almost 900 Iowa teachers who’re in the classroom today are paid less than $35,000 a year. It means some schools would use much if not all of the extra money from the state to raise salaries, with nothing left over to give bonuses to top teachers who agree to be mentors to other teachers.

Glass expects some smaller school districts would pay part of the bonus for a mentor teacher in a neighboring district, so that teacher would work with educators in both districts. Glass made his comments this morning during a news conference in Des Moines.