You are here: Home / News / Branstad will not run for Harkin seat, but Reynolds will “keep my options open” 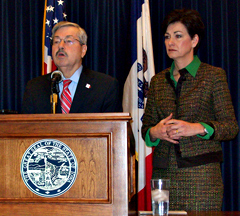 Governor Branstad and Lt. Governor Reynolds talk about a possible run for the U.S. Senate.

Iowa’s Republican governor isn’t interested in running for the U.S. Senate in 2014, but the lieutenant governor isn’t ruling out the idea she may seek the seat currently held by Democrat Tom Harkin.

Harkin announced on Saturday that he will not seek reelection in 2014.

Governor Terry Branstad was asked this morning if he would run for the senate.

“Over the years I have been encouraged to run for the senate a number of times and I’ve always said: ‘I’d love to run, but I don’t want to serve,'” Branstad said, laughing.

Branstad’s 2010 running mate, Lieutenant Governor Kim Reynolds, told reporters she had been “flattered” this past weekend to be included on lists of potential candidates for the U.S. Senate.

“I’m going to keep my options open, but I tell you what…the take-away from this press conference is we have a very focused agenda and we’re going to work really hard at getting this done. I’m proud of where we’re at. I’m proud of the tough decisions that have been made,” Reynolds said. “We have a tremendous opportunity to work with the House and the Senate to put in place significant reform. It’s 2013. Let’s get these great things done. Let’s show D.C. how it’s done in Iowa and then I’ll we’ll look at 2014.”

Iowa has never elected a woman as governor or sent a woma to serve in the U.S. House or Senate. Reynolds dismisses the idea there is a glass ceiling in Iowa politics.

“You know that’ll happen. It’ll happen in time,” Reynolds said. “I’m proud to be serving as lieutenant governor and a partner for Governor Branstad. we serve as a team. We ran as a team.”

“I can tell you it’s never easy to beat an incumbent and now you have a situation where this United States senate seat does not have an incumbent,” Branstad told reporters. “And so there’s a lot of people that may have had some thoughts or some ambition who are all of a sudden saying, ‘This is my chance. This is the opportunity.'”

“I appreciate Senator Harkin’s long service to the people of Iowa and I want to thank him for what he has done and what he’s accomplished, especially for people with disabilities. He’s been a real champion on that subject,” Branstad, a Republican, said this morning. “…He and Senator Grassley have been champions for agriculture and renewable fuels and things that are important to our state, so I want to thank him for his long and distinguished service to the state of Iowa.”

Branstad, by the way, is Iowa’s longest-serving governor, currently in his 18th year as the state’s chief executive. Iowa’s other U.S. Senator, Republican Chuck Grassley, has held elected office since 1959. Grassley won his seat in the senate in 1980. Harkin served a decade in the U.S. House before winning Iowa’s other senate seat in 1984.