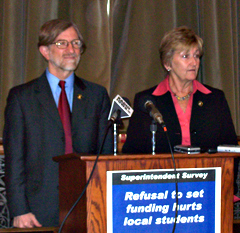 Democrats in the Iowa House and Senate say the vast majority of Iowa superintendents they’ve surveyed want lawmakers to decide on a general level of state support of public schools by March 1.

Republican Governor Terry Branstad is calling on legislators to pass an education reform package first, but Representative Sharon Steckman, a Democrat from Mason City, says schools first need to know how much money they’ll be getting from the state for the academic year that begins this fall.

“It’s our goal to have world class schools and we can’t shortchange our schools,”Steckman says. “We should have passed this last year.”

Senator Herman Quirmbach, a Democrat from Ames, says letting schools know how much state aid they’ll have this fall should be step one in the process.

“You’ve got to keep the lights on in the schools. You’ve got to buy the pencils, order the textbooks, put gas in the school bus and, you know, pay the teachers,” Quirmbach says. “We need to keep our schools going, even as we look forward to improve them in the future.”

On Wednesday, Democrats in the senate intend to vote on a bill that calls for a general four percent boost in public school budgets.

Representative Ron Jorgensen, a Republican from Sioux City who is chairman of the House Education Committee, says there’s no reason lawmakers can’t pass education reform by the end of February.

“My hope is to give it the proper hearing that it needs to have, but not delay the process if at all possible,” Jorgenson says. “You could analyze something to death, too. At some point in time, you just need to figure you’ve got enough information and make a call.”

Schools have a mid-April deadline to certify the budget for the school year that begins this fall. The education reform plan Governor Branstad is touting would start with a full year of planning in schools rather than immediate implementation.