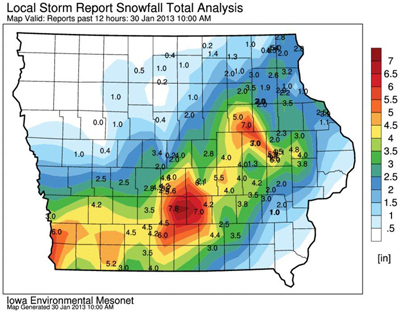 Iowans are breaking out their snowplows and shovels again today. National Weather Service Meteorologist Rod Donovan says much of southern, central and northeast Iowa is buried under 4 to 6 inches of snow.

“Out highest snowfall totals have been around 7.8 inches in Indianola. We had a 7 inch report near Knoxville and another 7 inch report between Waterloo and LaPorte City,” Donovan says. Snowfall totals in northwest and north-central Iowa are between 1 to 3 inches. 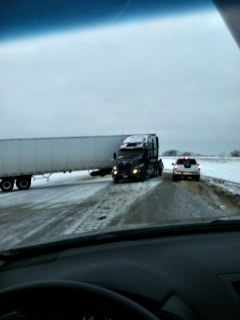 Jackknifed semi on I-80.

While the snow is tapering off, strong northwest winds are picking up. “Generally, 20 to 30 miles per hour with gusts toward 40 miles per hour,” Donovan says. “So, even though the snow has diminished, we do have visibility reduced to one-half to one mile out in rural areas.”

The wind is blowing in some very cold air. Lows will drop below zero across northern Iowa and in the single digits elsewhere. That will push wind chill readings into the 20-to-30 below zero range.

“It’ll be even colder Thursday night as Arctic high pressure arrives and we could be see below zero temperatures across most of the state,” Donovan says. Warmer weather is on the way. Temperatures could push above freezing this weekend.