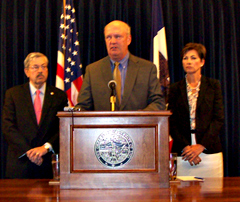 Dr. Harbans Deol, the director of medical services for Iowa’s nine prisons, says those inmates diagnosed with illnesses like bipolar disorder, schizophrenia and depression “take a lot of resources” and require special training for the staff who deal with them.

“They cannot picture what you’re talking about and if you start giving them orders when they’re having an acute episode…to say, ‘Hey, get up and go ahead make the bed,’ guess what? In that little sentence you have given them three different orders. They don’t get it. You have to direct them step by step.”

Dr. Gary Hinzman is a top administrator in the community-based corrections system that manages half-way houses and other low- or no-security facilities.

“We have come to learn that within our system we have people who come to us with mental health issues who would otherwise not be criminals,” Hinzman says. “And if we can identify mental health issues on the front end of the system, we can prevent those people from entering into the system further, into the costly prison system or even our own residential facilities, which are costly.”

According to Hinzman, the “shadow behind the curtain” is that many of those who are on probation have mental health problems that need to be diagnosed and treated.

Iowa Department of Corrections director John Baldwin says the governor has approved plans to hire more psychiatrists to work in the nine prisons. Those psychiatrists will do video consultations with people who’re charged with a crime, have a mental illness, but are in halfway houses or other community-based facilities outside of the nine state prisons.

“We think that’s a huge step forward and we’ll be the nation’s trend-setter in trying to keep people at the lowest level of the corrections continum,” Baldwin says. “That’s just huge because so often they come to us when, if they had some psychiatric care in the community, they would not have continued up the corrections scale.”

According to Baldwin, mental health professionals in the private sector do a good job, but they often can’t handle patients who get “aggressive” and the downward spiral starts — and those patients wind up being charged with a crime.

“We’re going to work with those people to try to keep them in the most logical place that they can be housed,” Baldwin says. “…I’m just so excited to have this conversation now.”

Baldwin and other prison officials were invited to speak before an Iowa Senate committee Tuesday. The committee’s focus on mental health issues is one reaction among Iowa legislators to the mass shooting at a Connecticut elementary school.

Gun rights advocates have proposed other measures, like allowing Iowans who have a permit to carry a concealed weapon carry that gun in a school.