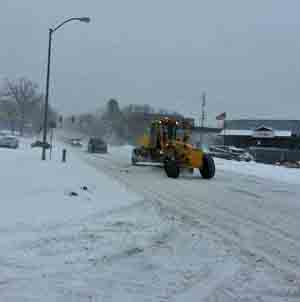 Grader works to clear a street in Des Moines.

“Breaker-breaker-one-nine” was how truck drivers used to communicate on the citizen’s band radio, but technology has changed. The Iowa Department of Transportation is reaching out to truckers during this latest snowstorm, hoping they’ll send Tweets, pictures and video about the messes they’re encountering.

Bob Younie is the D.O.T.’s state maintenance engineer. “We think it would be very useful for professional drivers and other motorists to let us know what they see,” Younie says.

“We can’t be in every part of the system all the time, although we’re continually plowing snow. We think the use of social media will help us understand what people are seeing and experiencing.”

The snowstorm that hit December 19th and 20th dropped nearly 14 inches of snow on parts of central Iowa. Younie says situations arose during that storm that were teachable moments where a quick note via Twitter or Facebook would have gone a long ways to helping overcome winter travel obstacles.

“People experience a condition that sometimes we don’t see, for example, a slow-down in traffic or people being unable to move or people being stranded,” Younie says. “We had some comments about that during the blizzard. Those are the kinds of information that’s valuable to us. We want to know things we can take action on.”

Today’s snowstorm is much less ferrocious than the late December blizzard, but parts of Iowa may still get six to eight inches of snow from this blast. Plus, the winds are whipping up the snow and causing white-out conditions in some areas.

Younie says, “There’s snow on the roads, snow’s blowing and people need to be concerned with their own personal safety by slowing down, giving a little extra space around them, and let’s just all travel safely.” The Iowa D.O.T. is using the following hashtag — #iatraffic — during this event and recommends other Twitter users do the same to find relevant tweets using that key phrase.

If you’re sending pictures or video, use the “geotag” function, so your location can be pinpointed. Keep up on conditions by calling 511 or visit “511ia.org“.