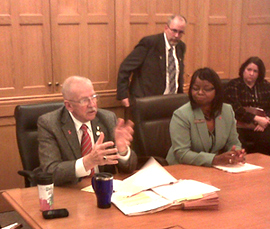 A proposal that would let doctors prescribe marijuana to ease the pain of their patients is going nowhere in the Iowa House.

A three-member House subcommittee held a 40-minute public hearing on the concept this afternoon, then two of the legislators involved killed the legislation.

“I’ve watched state government function since 1962 and doing any bill, let alone this one, that would legalize marijuana would be at the top one or two of three stupidest bills that have been passed by this organization, in my opinion,” Baudler said.

Ray Lakers of Des Moines said he needs marijuana as treatment for his multiple sclerosis.

“A growing number of people across the United States and the world with multiple sclerosis have shown great benefit of using cannabis rather than FDA drugs,” Lakers said.

Representative Deborah Berry, a Democrat from Waterloo, said as her brother was dying several years ago, he smoked marijuana to relieve the pain of his cancer.

“Alcohol and tobacco — I think those are much more addictive, much more dangerous in my opinion,” Berry said. “I think that we should at least just open it up and investigate the use of medical marijuana.”

Peter Komendowski, president of the Partnership for a Drug Free Iowa, responded.

“In your opinion marijuana may not be as dangerous as cigarettes or alcohol,” Komendowski said. “I still think it represents a clear and present danger and one we need to work to the fullest extent of the law to protect our children from.”

“I just hope that you listen to Iowans’ voices and you vote for what we want,” he said, “because you’re representing us.”

Erin Kennedy of Nevada works with kids with substance abuse problems. She predicted medical marijuana would wind up in the hands of those who do not have a prescription for it.

“I’m sure we’ve put every precautionary method that we can think of in place for tobacco and alcohol,” she said, “and yet our youth continue to get access to that.”

Marijuana is illegal in the United States but 18 states have laws which permit marijuana to be prescribed as a treatment for the symptoms of pain and nausea that are often associated with chronic and fatal illnesses.