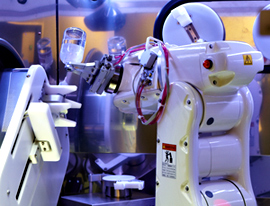 An eastern Iowa hospital is the first in the nation to install a high-tech robot that will mix and administer chemotherapy drugs.

The machine is called the I-V Station Onco and it’s being set up at Mercy Medical Center in Cedar Rapids. Desmond Waters, Mercy’s pharmacy director, says when the robot goes online, it will help to reduce errors and waste while bringing more cost-effective care for patients.

“The robot then actually takes a picture of the vial and compares it to the database to ensure the right med was put into the robot. It then weighs the vial so each medication has essentially its own weight.”

The hospital provides some 11,000 I-V chemotherapy preparations every year so Waters says the benefits of having this precise, state-of-the-art equipment for patients will be far-reaching. Waters says, “Throughout the whole process, it’s taking pictures and weighing the product, ensuring not only that we have the right med but the right drug, the right concentration, all of that so that every medication that comes out of that robot is as close to 100% accurate as possible.”

According to Health Robotics, the maker of the robot, the technology has no recorded medical errors within the organizations across Europe and elsewhere that already use it. While the use of the robot aims to add layers of safety for the patient, Waters says there’s another advantage for the hospital staff, as the meds used in chemotherapy are often quite toxic.

“People who mix chemotherapies do have higher risks of adverse events because they’re exposed to this medication so by removing them, it’s actually a safety mechanism for them,” Waters says. “It’s a two-fold advantage.”

The machine is in the process of being set up and staff members are still being trained in its use. Waters says it should be operational by mid-February. He couldn’t specify the price of the robot but said it cost several hundred-thousand dollars.