You are here: Home / News / Harkin predicts another vote on U.N. treaty for disabled 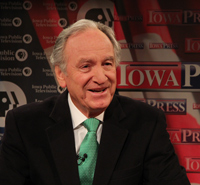 The Iowan credited with shepherding the 1990 “Americans with Disabilities Act” through congress predicts the Senate will vote again on a United Nations treaty on disabilities.

The treaty failed to pass the Senate in early December, a sign of the times in Washington according to Senator Tom Harkin.

“I’ve often said if we brought up the Americans with Disabilities Act today, it wouldn’t pass,” Harkin says.

Harkin says the U.N. treaty merely calls for disabled people around the globe to have the same rights disabled Americans were granted 23 years ago.

It requires 67 votes in the senate to ratify a treaty and a group of Republicans blocked a vote in December, suggesting the treaty would threaten the ability of parents in this country to homeschool their children.

“We’re going to bring it up again, probably in the next month or so and hopefully, hopefully, we’ll get them to vote for it,” Harkin says.

Harkin made his comments Friday during Iowa Public Television’s “Iowa Press” program. It will be rebroadcast Sunday at noon.