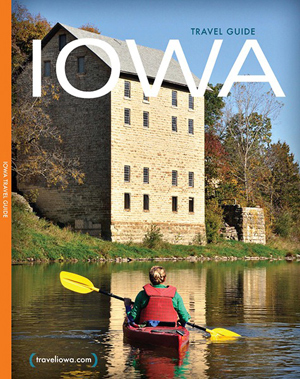 A woman from Cedar Rapids has won a competition that will put her photo on the cover of the 2013 Iowa Travel Guide.

This morning the governor and Lieutenant Governor Kim Reynolds unveiled Jessica Rilling’s photo of a kayaker on the Turkey River near Elkader.

“What a great image to showcase Iowa to the rest of the world,” Reynolds said. “Congratulations to Jessica on being selected. We’re very excited to see the final product when they are printed later this spring.”

Rilling does not get a monetary reward, but Governor Branstad says she has the pride of knowing she beat out six-hundred other submissions in the photo contest.

“There’s a lot of amateur photographers in Iowa that do enjoy taking beautiful pictures like this,” Branstad said. “This is really close to the trout hatchery at Elkader, too. I actually stayed there on a mini-vacation there one time.”

The Iowa Tourism Office has revamped its website to promote Iowa events and destination, but, according to Governor Branstad, there’s nothing like an actual paper map. 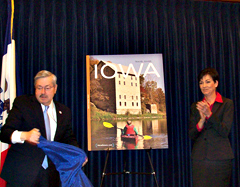 “I know people use other mechanisms, but I still am a believer in maps, too,” Branstad said. “There’s other technology, but sometimes that other technology even though troopers use it doesn’t always work as well as the maps.”

By state law, Iowa governors are not allowed to drive and are to be driven by state troopers. After Branstad’s remark this morning about his trooper escorts, Reynolds suggested: “I think there’s a story there.”

Branstad replied, with a laugh: “We’ve been lost a couple of times.”

As a state budget cutting move and a nod to growing consumer use of electronic mapping information, Republican legislators acted to reduce the number of paper maps of Iowa printed by the Iowa Department of Transportation. Branstad said the Iowa Tourism Office is going to print more of the DOT maps to hand out to tourists.

“It is designed to try to help promote Iowa in coordination with this tourism guide,” Branstad said.

According to state officials, more than 100,000 2013 Iowa Travel Guides will be printed. The publication will give details about more than 700 Iowa attractions and accommodations ranging from hotels to campgrounds.