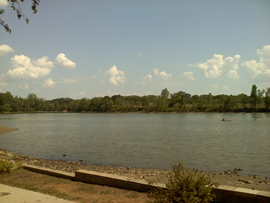 The City of Evansdale is honoring the memory of two girls who were abducted and murdered last year by renaming areas of Meyers Lake. Lyric Cook and Elizabeth Collins disappeared while riding their bikes near the lake last July.

Their bodies were found in December. To date, no one has been arrested for their deaths.

Jeff Dawson, Chairman of the Evansdale Parks Department, says the trail that runs around the lake is now known as the Trail of Angels and a park next to the lake will be known as Angels’ Park.

The project was thought up and put together through volunteers and fundraising. “It’s nice to see the community pull together the way they have,” Dawson says. The group hopes to continue raising money to add a few more memorials and additions to the park like a roadway from the land to the island, a gazebo, and possibly a bronze statue.

Dona Frickson is with the Evansdale Chamber of Commerce. “We want to keep this going so that we can make something positive out of this,” Frickson says. “We want to show that the lake is not just known as a bad place where bad things happen. We want to do something good.”

While the name changes are being made because of the tragedy involving Elizabeth and Lyric, Frickson says “Angels” can apply to anyone.

“We have had the two girls, Elizabeth and Lyric, and then we also lost Lindsay Nichols this past year,” Frickson said.

“This is going to be for anyone who lost someone and would like to memorialize one of their angels.” Twenty-two-year-old Lindsay Nichols was murdered in Jesup last year by an ex-boyfriend. The city has also declared July 13th as Lyric and Elizabeth day.

Donations to the “Angels Memorial Fund” can be made at First Security State Bank, in Evansdale or Cedar Falls, or at any Veridian Credit Union.