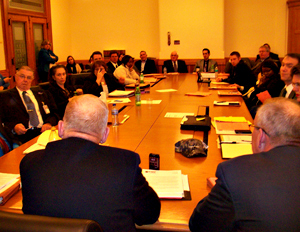 Women could be charged with a felony if their newborn tests positive for drugs under legislation that has cleared an Iowa House committee.

Representative Clel Baudler, a Republican from Greenfield, is the bill’s sponsor.

“My hope is with this bill that it will force mom to get some treatment,” Baudler said during Tuesday’s committee meeting.

“We know they’re not going to put ’em in prison for something like this. That’s just the justice system, the way it is today.”

Representative Ako Abdul-Samad, a Democrat from Des Moines, said the bill isn’t a “comprehensive answer” to the problem.

“If you have a father that’s addicted and a mother that’s not, but there’s meth smoked actually in the home, it will be detected in the child,” Absul-Samad said. “So the then mother gets blamed for it, but the father then walks away?”

Representative Mary Wolfe, a Democrat from Clinton, said the threat of having newborns tested for drugs might prompt some pregnant women to have their babies outside a hospital.

“A woman who’s addicted to drugs, when she goes into labor, she may — to the extent that she thinks about it at all — she would choose to have her baby in an alley or in a closet somewhere rather than risk going to the hospital,” Wolfe said.

Representative Jarad Klein, a Republican from Keota, responded: “I will continue to support this bill because I believe we can save a life and if we can save one life, that is a win in my book.”

Representative Tom Shaw, a Republican from Laurens, is a former a police chief who made drug arrests.

“I have had numerous drug users come up to me and…actually thank me for arresting them because without law enforcement involvement, they didn’t take their treatment seriously,” Shaw said. “…It wasn’t until they had the threat of prison time or sustained jail time that they actually went into treatment with the attitude that they had to clean themselves up.”

Representative Ruth Ann Gaines, a Democrat from Des Moines, adopted a boy who was born addicted to drugs.

The bill passed the House Public Safety Committee on a 15-6 vote.