You are here: Home / Education / New UNI president hopes to raise awareness of the school 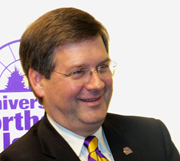 The new University of Northern Iowa president will move to the Cedar Falls campus from Pennsylvania. The Board of Regents met today and selected from two finalist.

Regent Nicole Carroll announced the selection after a closed-door discussion among the board. “At this time I would move to approve the selection of Dr. William Ruud to serve as the President of the University of Northern Iowa at a salary of 340-thousand (dollars), effective June first 2013,” Carroll says.

Ruud is currently the president of Shippensburg University in Pennsylvania. He was selected over the other finalist, Michael Wartell, former chancellor of Indiana University-Purdue University Fort Wayne.

Ruud talked with the media shortly after the board approved hiring him. “It is absolutely my pleasure to accept the opportunity to be the 10th president of the University of Northern Iowa. I’m excited,” Ruud said. Ruud says his goal is to increase awareness of the school.

“I really look forward to working with the Board of Regents, the faculty, staff, the students, the alumni, the community of Cedar Falls/Waterloo, and the entire State of Iowa,” Ruud says. “To not only make the University of Northern Iowa a greater better place to be, but to make higher education known in the state of Iowa, throughout the United States, throughout North America, and clearly throughout the world.”

He will replace Ben Allen who is retiring. Allen faced criticism and concerns on and off campus over budget cutbacks he made to deal with the down economy and lower state aid. Ruud was asked about how he will heal some of the wounds that remain on campus.

“I think the issue is, is to have over the next four or five months some good conversations with the current administration, to have some good conversations with the current leadership, the faculty and staff,” according to Ruud. “But as I said in my interview, I want to listen. I had a supply sergeant in the United States Army that once told me ‘you got two eyes, you got two ears, you got one mouth, use them proportionately.’ It’s still true today. That was 35 years ago.”

Regents president pro-tem Bruce Rastetter says one factor favoring Ruud is that he is currently a president of a school that is a lot like UNI. “He’s been very active in fundraising, which we think is important for UNI. And also in growing, and we be he can help grow that university and focus on the areas that need to be,” Rastetter said.

“We had two really great candidates and we spent a long time deliberating, but we are excited his enthusiasm, his knowledge, his vision for education.” Northern Iowa’s faculty is represented by a union, and Rastetter says Ruud has experience with unions at his current school.

“It’s very similar, there’s a number of unions in Shippensburg as well, so he used to dealing with a faculty union. And he clearly presented that to us in a very positive way,” according to Rastetter. “We look forward to him after a tough year and a half, to continuing on and work with the faculty, and also to grow the university. We’ve got a great university and that image needs to be raised to attract more students.”

The board approved a three-year contract for Ruud.