You are here: Home / Crime / Courts / Lottery tickets have more security than any product in store 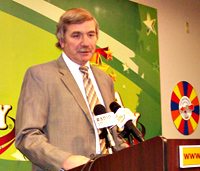 Authorities got a break this week when one of two thieves accused of stealing $900 worth of lottery tickets from a central Iowa convenience store cashed in a few winning tickets.

Iowa Lottery tickets can be tracked, according to Steve Bogle, the Lottery’s security chief.

“Between bar codes and inks and special patterns — along with our gaming management system, those things provide us real-time data about where our products have been and where they show up again later,” Bogle says.

In addition to surveillance video of the original theft that showed one of the men, a photo of the other suspect cashing in tickets at another store was released to local media. A tip led police to a motel where the two men were staying.

“The swiftness with which individuals were apprehended in this case speaks to the value of the information that we can provide and the coordination assistance that it provides to law enforcement,” Iowa Lottery vice president Mary Neubauer said at a news conference at Lottery headquarters this afternoon.

The tickets were stolen Monday morning. The men were arrested Thursday. Both men have been charged with third-degree burglary and second-degree theft. Bogle — the head of Lottery security — admits lottery tickets can be a prime target for thieves.

Stealing a lottery ticket is a class D felony, meaning a conviction could bring up to five years in prison. Bogle told reporters today that lottery tickets have more embedded security information than any other product sold in a convenience store.

“How many in here know what the make, model and serial number is on your big screen TV that you have at home? And if somebody’s breaking in your house right now stealing it, without that information — guess what? You might not be able to recover it,” Bogle said. “That’s the beauty of our products. Each one of them can be uniquely identified.”

The tickets were stolen just before 4 a.m. Monday from a Git ‘N Go in Des Moines. About an hour and a half later, a man cashed in two of the stolen tickets at another convenience store. One of the tickets was worth $25. The other was a $50 winner. Police found a pile of burned lottery tickets behind the motel where the suspects were staying.