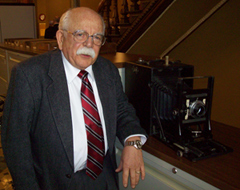 A biennial tradition was observed at the statehouse this year, with photographer Charles Stover at the focal point.

Stover, a 75-year-old from Norwalk, Iowa, has been taking panoramic pictures of the Iowa House and Senate for decades.

“Thirty years,” Stover said, laughing before adding: “a while.”

Last Thursday senators, their secretaries and other staff gathered on the floor of the Senate and stood still as Charles Stover’s camera slowly rotated from left to right.

“This camera is a 1923 circuit camera,” Stover explained as he was packing up.

It was made by Eastman Kodak.

“The camera actually uses what we call a tri-focal-length lens,” Stover said, “which is an old lens and an old way that they used to make lenses.”

Stover can reposition the internal workings of the camera to make a 10-inch lens, an 18-inch lens or a 24-inch lens. That’s exponentially larger than the typical camera lens. The size of the film Stover puts through this camera is enormous.

That means the image taken of the senate last Thursday was imprinted on a piece of film that’s seven feet long and eight inches wide.

“If you look right in here real close, you can see a fly-ball governor like on the old thrashing steam engines and the top collar will go up and down as I adjust the speed on it and that’s governs the speed of the rotation,” Stoval said.

There’s a gear inside that part to synchronize the speed of the film moving inside the camera.

“I’ve been photographing panoramics since about 1980 with circuit cameras,” Stover said. “Certainly digital’s here and digital’s not going to go away.”

After Stover used his 90-year-old camera to take a panoramic photo of the Iowa Senate this past Thursday, another panoramic image was snapped — with a digital camera. Stover called it progress.

“Just for the fact that people saying, you know, ‘We like big black and white photographs and everything,’ I say to them: “How did you get to work today?’ (They say:) ‘Well, I took a car.” I say: ‘Why didn’t you take a horse?’ because that technology is now gone,” Stover said.

In 2015 another panoramic will be taken of the members of the Iowa House and the Iowa Senate. Stover plans to be there, with his 1923 Eastman Kodak panoramic camera.