You are here: Home / Education / Branstad points to North High as example of teacher mentoring 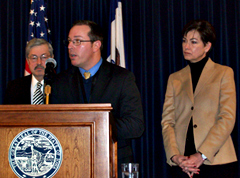 Governor Branstad used his weekly news conference to make another pitch for his education reform plan.

Branstad has asked legislators to require in schools statewide. Matthew Smith is the principal at Des Moines North High School.

“Prior to 2010, North High School ranked in the bottom five of high schools performing academically in the state of Iowa,” Smith said.

“Today, we have moved up significantly. We are in the middle of the pack and we are still climbing.”

Tests show North High students are doing about 20 percentage points better than the statewide average in terms mastering concepts and advancing to the next grade level. Of the 75 teachers at North High, 10 of them are “master” teachers who coach other teachers and 40 of teachers meet daily to go over students’ performance in the classroom that day, and chart ways to improve student achievement the following day.

Some critics of Governor Branstad’s proposal say it takes the best teachers out of the classroom, away from one-on-one contact with students, to be mentors to other teachers. Smith said his school is now led by the teachers — and it’s working.

“It’s about systems thinking. It’s about prioritizing your time,” Smith said. “If you can take one of your best teachers and allow them to assist in the coaching and mentoring of other teachers — that teacher, isolated, affects 25-30 students in a class period. When you allow them to coach and teacher other teachers, you’ve now affected 150 students.”

Governor Branstad suggests his education reform ideas will set Iowa on course to be a top 10 state on national tests that rate math and reading skills among 4th and 8th grade students.

“We’ve been dropping,” Branstad says. “You know, we’re going the wrong direction. We’ve gone from first to 25th in the last 20 years and now we intend to, in this very short period of time, turn it around.”

Branstad’s goal is to have Iowa students be in the top 10 on math and reading scores by 2019.