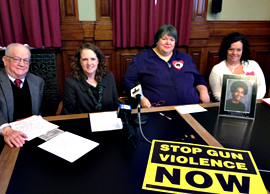 Members of “Iowans for Gun Safety” spoke at the statehouse Monday.

A coalition of groups calling themselves “Iowans for Gun Safety” held a statehouse news conference today, on the eve of President Obama’s annual address to congress.

“Probably in tomorrow night’s State of the Union, undoubtedly, he will bring up the need for universal background checks; renewing an assault weapons ban, this time with teeth; and a limitation on the size of ammunition clips to 10 bullets.”

But according to Jayne, requiring background checks and new limits on ammunition clips are higher priorities for his group rather than a ban on assault-style weapons.

“Not that I’m trying to step out and say we shouldn’t do this, but we get really involved in what is an assault weapon and what gets excepted to the law and what does not,” Jayne said, “so if you’ve got to choose, I’d take those two.”

Reverend Cheryl Thomas is helping organize local chapters of “One Million Moms for Gun Control” to counter the influence of the National Rifle Association.

“Four million people should not be keeping 300 million people at political gunpoint,” Thomas said. “We really must begin to change that and we do it by activism.”

She points to the “Iowa Poll” in this weekend’s Des Moines Register which indicated 88 percent of Iowans support requiring background checks for all gun purchases.

Governor Branstad told reporters this morning that Iowans have “strong opinions on both sides of the gun control issue” and rather than pass new state laws, he’s trying to work to prevent gun violence by addressing bullying in schools and improving access to mental health services in Iowa.