You are here: Home / News / Pope’s decision a surprise to one Catholic leader 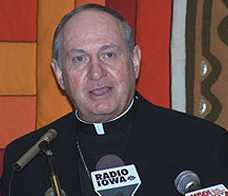 The bishop of the Catholic Diocese of Des Moines says he was “very surprised” at this morning’s announcement that Pope Benedict will be stepping down at months’ end due to his declining health.

Bishop Richard Pates says the 85-year-old pontiff is the first pope since the Middle Ages to make such a move.

“It’s the first time in 600 years so there isn’t a lot of precedence in the most recent times for this occurring,” Bishop Pates says.

“I think the unexpected decision was very courageous on his part and is very evident of his commitment to serve the Church as long as he is able but not to go beyond that.”

The last pope to resign willingly was Celestine the Fifth in the year 1294. Since being elected pope in 2005, Benedict has faced a series of challenges, including his giving an address that greatly upset Muslims, a scandal over the leaking of his private papers by his personal butler and the continued claims of child sexual abuse involving the Church.

Pates says different pressures can certainly have an impact on your health, but he believes the reasons given for the Holy Father to step down. “He addressed these questions and issues that he faced directly and with a great deal of honesty,” Pates says. “I think it’s not the scandals as much as the fact that his health is such and he feels a need to retire because he can no longer fulfill to the degree he would like his responsibilities.”

The bishop says Iowans will respect the pope’s decision but he’ll be greatly missed. “I believe they will be appreciative for the service he exercised,” Pates says. “He certainly was an extraordinarily gifted theologian. His writings and his talks will be appreciated in the tradition of the Church for centuries and I also think they grew to admire his warm pastoral heart.”

Pope Benedict will be stepping down February 28th. It’s expected that a replacement will be chosen by the end of March. The Diocese of Des Moines includes 81 parishes in 23 counties in central and southwest Iowa with about 140,000 members. Pates says there are about 500-thousand Catholics in Iowa.

Tom Chapman, executive director of the Iowa Catholic Conference, was asked what type of pope he thinks may be chosen next. “It’s interesting, because the last time, when John Paul II died, I think Pope Benedict was kind of the favorite and people kind of expected that he would be the one. Now, there really is no so-called consensus candidate. It will be interesting to see if they decide to go in a way of someone who is coming from maybe a less developed part of the world.”

The Catholic Church is “really growing” in parts of Africa, Chapman notes, and they might go in that direction. The pope’s resignation is of particular interest due to the timing as this is considered a special “Year of Faith” by the Church.

That landmark summit ran from 1962 to ’65 and made some “updates” in how the Church presents itself to the world, for example, an end to doing Mass in Latin.