You are here: Home / Education / GOP may back away from demand to end tuition set aside 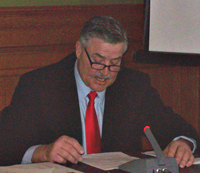 Board of Regents President Craig Lang talks to legislators.

Several Republicans in the Iowa House raised a ruckus about a tuition policy at the state universities last year, but a key Republican says the GOP may vote to let the schools continue to tack on a charge to tuition fees that goes to provide scholarships for other students.

Republican Scott Raecker was a leading critic of the policy last year.

“Ask the constituents in your district if they were aware that the tuition they’re paying at the universities, if that money is going to more than just the cost of their education, but to off-set the cost of other education,” Raecker, who did not seek reelection, said during House debate last April.

A few months later the board that governs the universities adopted the goal of eliminating the tuition charge that goes to scholarships and Republican Governor Terry Branstad has recommended sending the universities nearly $40 million in state tax dollars to replace the losses.

“We didn’t expect them to come up with any type of proposal to do anything different, we just felt that we’d open the conversations of where it was at and where it started and what it needed to be, that we would arrive at a figure that was acceptable,” Dolecheck says.

Dolecheck, the co-chair of the panel that drafts the state budget for the universities, suggests a 15 percent charge on tuition fees that would be diverted to scholarships might be acceptable to Republicans. That’s just about what the University of Northern Iowa is charging now. 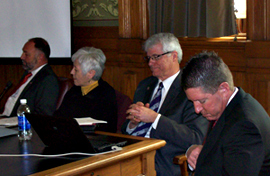 Other Republicans like Representative Ron Jorgensen of Sioux City are asking the universities to use more money from private donors to bankroll the scholarships now financed by tuition fees from other students.

“Is there any reason, sitting about a $1.5 billion combined endowment portfolio that you cannot take the money out of the endowment from unrestricted funds?” Jorgensen asked university president’s today.

“With the economy as it’s been going, I imagine the growth’s been pretty good this past year.”

The presidents of the three universities testified before a budget subcommittee this morning and each said they’re asking for more money from private donors, but donors more often than not place restrictions on how their donation can be spent, preventing the kind of shift Jorgensen suggests.

“I think having these three universities with the distinct missions, with the different orientation — quite honestly — in how we do things, but yet all maintaining that quality is something we don’t want to mess with,” Allen said.

The president of the Board of Regents promised legislators his board will work to limit future tuition increases to the rate of inflation — but Regents president Craig Lang added a caveat.

“It is important to note that the cost of doing business at a university is higher than in the rest of the economy,” Lang said. “This is largely because teaching and research are more labor intensive than most activities in the economy and it is generally the case that the cost of labor rise faster than other prices.”

Legislators did not ask any questions about the recent controversy over The Harkin Institute at Iowa State University.