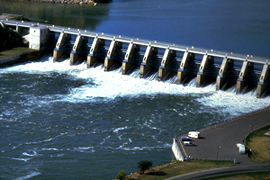 Despite the threat of continued drought, the U.S. Army Corps of Engineers is planning on a “normal” navigation season for 2013 on the Missouri River.

Bill Doan, a water engineer in the Corps’ Omaha office, says levels on the river will be low, but it will be navigable.

“Flows for this level of service are designed to provide an eight-feet deep by 200-feet wide navigation channel and would require Gavins Point monthly average releases ranging from 20,000 to 28,000 (cubic feet per second).” Doan says the low water now in the up-river reservoirs will definitely have an impact on hydro-electric power production.

“The forecast for 2013 energy generation, with the basic simulation, is 7.9 billion kilowatt hours,” Doan says. “With normal reservoir levels and releases, we would expect about 10 billion kilowatt hours.” River levels were exceptionally low all of last year due to the severe drought, which followed record flooding on the Missouri which lasted a large portion of 2011.