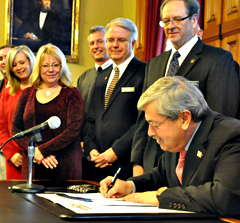 Governor Branstad signs the first bill to reach his desk from this legislative session.

Governor Branstad has just signed a bill into law that ensures Iowa’s tax code parallels or “couples” with changes made at the federal level. Branstad said it guarantees Iowa individual income taxes will not go up as a result of federal changes.

“I know the tax preparers of Iowa really appreciate this, too. They’ve been waiting on this. And we’re doing it on Valentine’s Day,” Branstad said. “How ’bout that as a gift, huh?”

Legislators from both political parties stood around Branstad as he signed the bill this afternoon. Branstad noted the bill passed without a dissenting vote.

“I hope the whole session goes this well,” Branstad said, laughing and drawing laughter from his audience. “At least we can all be hopeful, right?”

It was the first piece of legislation to pass both the House and the Senate this year. If the bill hadn’t passed, Iowans would have paid $24 million more in state taxes. 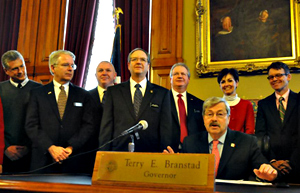 Governor Branstad prepares for the bill signing as legislators look on.

Photos courtesy of the Governor’s office.