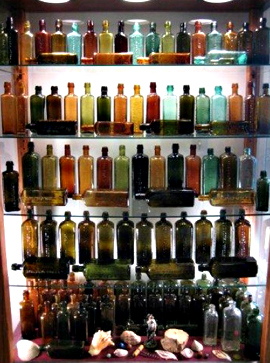 Bottles unearthed by The Outhouse Patrol.

An Iowa native is traveling much of the nation pursing his hobby of digging up what other people threw away — more than a century ago. Reggie Shoeman is in his fifth year of running the Outhouse Patrol with several buddies.

He says they’ll find the locations of old privies, get permission from the landowners, then start carefully digging.

Shoeman, a 71-year-old Navy veteran, says this unusual business grew out of his hobby of using a metal detector to search for lost treasures.

“Anything that would have gone into a dump today could have well gone into an outhouse, or a disused well or cistern the other side of 1900.” The most unusual item he’s found so far was a marble headstone for a Civil War soldier. The buried bottles they find once contained everything from medicines to booze and some of them, if they’re intact, can be very valuable. “We found a couple of bitters bottles,” Shoeman says.

“There were only a dozen known and we popped two out of an outhouse in the ghost town of Wicks, Montana,” Shoeman says. “We’re talking $1,500, give or take.” He’s heard of the rare bottles fetching more than $20,000 and even into the low six figures.

He has yet to unearth anything that valuable, but says he’s just enjoying the thrill of the search. The Outhouse Patrol gets a hand in pinpointing locations for potential outhouse digs using a website.

“They’ll take the historic maps and/or atlases of — 1860s, 1870s tend to be the most productive — and they will lay over Google Earth,” Shoeman says.

“I can see where an old hotel, saloon, boarding house, whatever sat, and I can mouse over and get geographic coordinates on the thing.”

By the way, digging through the remnants of old outhouses is not a smelly, icky job. Any human waste that was there a century ago has long since decomposed into, essentially, just dirt.

Shoeman now lives in Fort Smith, Arkansas, but used to call Boone, Iowa, home, and his mother still resides in the central Iowa town of Madrid.