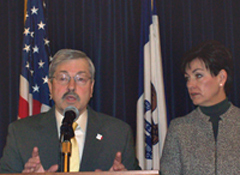 Iowa Governor Terry Branstad travels to California this week to try to lure west coast businesses to expand or relocate in Iowa.

“We’re not going to talk about the details of that, but it’s a happy hunting ground,” Bransad said of California. “They’re raising taxes…There’s great opportunities out there.”

Branstad will be in California this Tuesday and Wednesday.

Another Republican governor, Rick Perry of Texas, made a four-day trip to California last week, drawing the ire of California Governor Jerry Brown, a Democrat. A reporter today asked Iowa’s governor how he’d feel if Brown came to this state to try to poach Iowa businesses.

“He’s welcome to come anytime he wants to,” Branstad replied. “The last time I saw him in Iowa he came here in December to the Farm Bureau convention without a coat and most people said: ‘This guy — he doesn’t have a clue.’ He was running for president of the United States at this time. This is ‘Moonbeam Jerry Brown’ you know.”

Brown got that nickname in 1976, when a Chicago newspaper columnist suggested Brown would get the “moonbeam” vote for his presidential campaign.

Governor Branstad will meet with California-based companies that already have an investment in Iowa, as well as other prospects.

The governor’s office in California has not responded to a request for comment.

Earlier this month the governor of Texas bought ad time on California radio, touting the business climate in Texas. California’s governor dismissed Perry’s $24,000 ad buy as “merely a fart” given California’s massive size and multiple media markets. Governor Jerry Brown also suggested many Texans are so entranced when they visit California that they never go back to Texas.