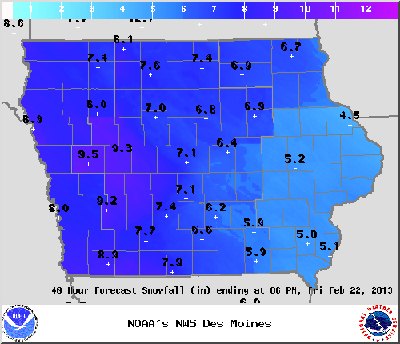 The National Weather Service has issued a winter storm watch for Thursday morning into Friday morning for much of the state. NWS meteorologist, Jim Lee, says the storm has been steadily heading for the state.

“We’ve been watching this for several days — in fact all the way since last week — and things remain more or less on track,” Lee says. “We’re looking at a potentially significant winter storm coming up. Mostly on Thursday and then lingering into Thursday night and into Friday.”

Snow forecast totals range from six to 10 inches with this storm, but Lee says the snow won’t be the biggest concern. “We’re not really trying to focus on the amounts too much. Most of the impact of this storm will come with the initial swath of snow moving across the state on Thursday. In which most of your accumulation is going to fall, but also there will be very strong winds,” according to Lee.

“So for several hours as that moves through it’s gonna be near-zero visibilities, drifting snow, very dangerous conditions to be outside.” Things will calm down as the storm pulls out Friday. Another storm is expected to move through early next week.

“However with that system, the temperatures are quite a bit warmer — so there’s a question of how much will be rain and how much will be snow. Right now I wouldn’t necessarily say we are anticipating any high snow accumulations until we see how that pans out. We’ll keep an eye on that one,” Lee says.

Heavy arctic winds are leading up to Thursday storm have prompted a wind chill advisory for 22 counties in northern Iowa until noon today as temperatures struggle to reach into the teens.