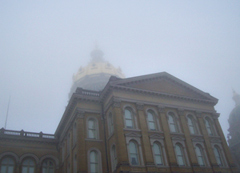 Foggy weather surrounded the capitol building earlier this month. The threat of snow has shut down activity today.

Very few of the 150 state legislators are at the statehouse this Thursday, which is traditionally the final day of the legislature’s three-and-a-half day work week. Nearly three dozen committee meetings scheduled for today have been canceled.

House Speaker Kraig Paulsen, a Republican from Hiawatha, says the committee leaders were encouraged to make “wise decisions” about their meetings.

“There’s no reason to have people driving in snowy, blizzard weather if we don’t have something critical to do,” Paulsen says.

There are another two weeks remaining before the deadline for policy bills to be approved by a committee, or be “dead” for the year. However, bills that deal with spending or taxes are never subject to such deadlines.

House Republican Leader Linda Upmeyer of Clear Lake says legislators were told to be “prudent” and “use good judgment” about whether to stay in Des Moines or leave for home. Many legislators left yesterday afternoon.

“You know, if I lived in the northwest part of the state, I think I might do that, but everybody will make their own decision,” Upmeyer says. “And anybody that needs to be here to work will be here to work.”

A 14-member committee that drafts the budget for state economic development plans is meeting this morning. At noon three senators are scheduled to meet to review a plan to expand the government’s Medicaid program to provide health care coverage to up to 150,000 more Iowans. Governor Branstad has repeatedly said he opposes the move.