You are here: Home / News / An end to “straight ticket” voting in Iowa? 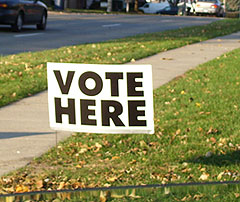 Iowa is one of just 15 states that still allow “straight ticket” voting — letting Iowans check a single box to cast a vote for every candidate on the ballot from one party.

House Republican Leader Linda Upmeyer of Clear Lake says there are plenty of competitive races, though, that are non-partisan.

“Remember that back side of the ballot? It almost never gets attention if you’re straight ticket voting and none of those are included in that straight ticket because they don’t run in a partisan fashion,” Upmeyer says, “so there’s a whole lot of (candidates) out there that don’t get a vote in spite of the fact that people probably think they do.”

According to Upmeyer, there are “a lot of good reasons” to end “straight ticket” voting in Iowa, especially since the majority of Iowa voters are not registered Republicans or registered Democrats, but have registered as “no party” voters.

“People, perhaps, less identify with one party all the way through the ticket,” Upmeyer says, “and so I think more and more people are wanting to vote for individual candidates and this encourages even more of it.”

But according to a survey conducted by staff in the Iowa Secretary of State’s office, over 43 percent of the voters in Linn County this past November were “straight ticket” voters.

Eighteen of Iowa’s 99 counties did not report how many “straight ticket” ballots were cast, but the rest did. In those 81 counties, nearly a quarter of all the ballots cast in 2012 in Iowa were from people who wanted to vote “straight ticket.”

Upmeyer says this push to get rid of “straight ticket” voting is not about how well Democrats did in 2012, or how well Republicans did in 2010.

“That ebbs and flows. Those are cycles, so if we’re doing something that could help us today, it could harm us tomorrow,” Upmeyer says, “so it’s best to have good policy and that’s what we’re trying to do.”

Upmeyer is likely to schedule a vote in the Iowa House on the issue this year. In 2011 the state of Wisconsin ended “straight ticket” voting and this year legislatures in four other states are considering bills to get rid of it. However, lawmakers in Utah decided to keep “straight ticket” voting in their state. In New Hampshire, some lawmakers there are trying to revive it so Republicans and Democrats can check one box and vote for all the candidates of that particular party that are on the ballot.