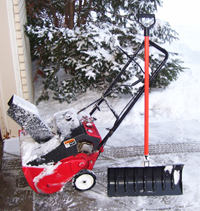 Snow totals were less than projected, but still required some equipment to clear drives and sidewalks.

The snowstorm didn’t drop quite as much snow as feared, but many spots across Iowa got at least a half foot of flakes. National Weather Service meteorologist Miles Schumacher says it’s still snowing in many areas.

He says most places saw a range of between three and seven inches of snow.

Snowfall totals are deepest in the Sioux City area with ten inches, seven inches in southwest Iowa around Council Bluffs, and six inches in northeast Iowa near Oelwein. Schumacher says the snow will taper off and end by soon.

Another inch or two will fall, as much as three, with the snow ending at midday. Schumacher says another approaching storm system could bring a wide section of Iowa more snow Sunday night into Monday.