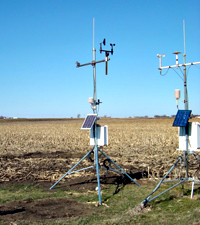 Whether the drought continues or not, Iowa farmers will soon be able to check soil moisture levels at a dozen key spots statewide.

“People that have a sandy place and a place with clay already know they have great differences,” Taylor says, “but still, if we have some idea on a very common soil for the county, if we know what is going on there, it will give an idea of how things are changing and the likely direction it will be moving in.”

I.S.U.’s Department of Agronomy is upgrading weather stations at several research and demonstration farms. At least 12 should be fully functional in several weeks when spring arrives. Farmers can always dig a hole themselves to try and gauge the soil moisture, but Taylor says doing so accurately is a hassle.

“To really know, you have to get a measure of soil from a certain depth, weigh it, dry it, weigh it again and see how much water the drying removed from it to know how much water was really there in your soil,” Taylor says. “It gets to be a real headache and, of course, people aren’t going to do that on a day by day, week by week, month by month basis.”

At each station, moisture sensors will be placed a foot, two feet and four feet deep in the soil. Readings will be taken every 15 minutes and sent by cellular phone text messages to the network. Each station costs about $12,000 to buy and install.

It’s hoped the network of weather stations can be expanded so there’s one in every county, but for now, a dozen will give a good snapshot of drought conditions to help farmers manage their risks.

“If you see that the weather station received an inch of rain and the soil moisture has moved up to such and such a level from where it was at the moisture station, and you know that at your farm because of the gauge out on your post that you got an inch and a quarter, you probably did a little better,” Taylor says, “or if you got half an inch, you didn’t do as well.”

The new weather stations replace ones that have been monitoring data at the farms for more than 30 years. Taylor said the original units made up the world’s first non-military network of automatic reporting weather stations. The weather stations will also measure rainfall, air and soil temperature, humidity, sunlight, wind speed and direction. A solar collector powers the units.