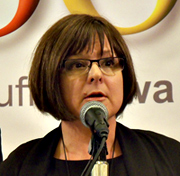 Iowa Economic Development Authority director Debi  Durham joked at the onset that she’d been invited to have a “friendly conversation” in public with members of the Senate Ways and Means Committee.

Senator Joe Bolkcom, a Democrat from Iowa City, told Durham “everybody’s friendly. By the end of the nearly-hour-long meeting, however, Bolkcom suggested the Egyptian company had taken Iowa taxpayers “to the cleaners” and he called Durham’s testimony “insufficient.”

“We’re here today talking about one extraordinary set of incentives to one foreign company and I think it’s germane to have this conversation to make sure that our director and her staff aren’t simply just shoveling money out the door unnecessarily,” Bolkcom said. Durham repeatedly pushed back on the criticism and, at one point, suggested senators were asking questions she’d answered months ago.

“I called all of you ahead of doing this deal and sent you follow-up information,” Durham said. “I was always transparent.” Orascom Construction Industries plans to build a $1.4-billion facility in Lee County, near the town of Wever.

The state of Iowa has pledged more than $100-million in incentives for the company. Three Lee County Supervisors were at the hearing, to publicly show they’re backing the governor’s economic development chief and to discourage senators from trying to change terms of the deal.

Senator Randy Feenstra, a Republican from Hull, says the people who struck the deal deserve “kudos” rather than criticism from Democrats. “You know, it seemed more like a witch hunt,” Feenstra says. Republican Governor Terry Branstad accuses Senate Democrats of “political overkill.”

According to Branstad, about 3,500 people will be hired to build the plant and, once it’s open, about 165 people will get full-time jobs to run the fertilizer facility.

AUDIO of hearing (runs 57 minutes, but there are gaps as sound system wasn’t working)