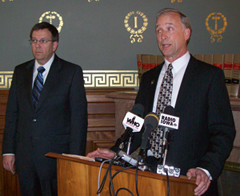 Legislators from both political parties have drafted initial outlines for next year’s state budget, with Republicans proposing to spend $124 million less than Governor Terry Branstad — a fellow Republican — suggested in January.

“We feel three percent is a very reasonable number that is being very responsible with the taxpayers’ money,” Soderberg says.

Democrats have a broad outline for state spending in the budgeting year that begins July 1 and it would spend about $484 million more than Republican legislators propose.

“This is a good, solid, sustainable, prudent budget for the state,” Dvorsky says.

The Republican plan spends about 90 percent of available tax revenue. It means, at this point, both Republicans and Democrats are not planning to spend between $300 million and $800 million in expected state tax collections. Some of that could cover federal budget cuts that impact state government programs. Representative Soderberg, who is chairman of the House Appropriations Committee, says an expected second-year of drought could hurt the state’s economy, too.

“The budget target is efficient, effective and very necessary as we face some financial uncertainty and unstable times,” Soderberg says.

“This is still not an easy budget,” Gronstal says. “…We think it reflects the priorities of Iowans and it reflects an effort to grow Iowa’s middle class.”

A potential increase in state worker salaries is another budget uncertainty for legislators. The union representing the largest share of state executive branch employees and the Branstad administration could not agree on a new two-year contract, and an arbitrator has been called in to settle the dispute.