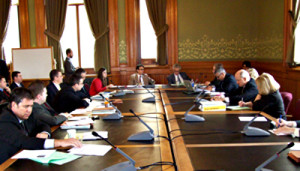 The $250 million commercial property tax credit plan devised by Democrats in the Iowa Senate has cleared a senate committee on a party-line vote.

Senator Joe Bolkcom. a Democrat from Iowa City, is chairman of the Senate Ways and Means Committee.

“There is no perfect bill,” Bolkcom said today during committee debate. “…We’re about doing what we can get done.”

“This would be just another complication or another Band-Aid to a bigger problem underneath.” Feenstra said.

Republicans in the House are reviewing Republican Governor Terry Branstad’s alternative which would reduce commercial property tax rates by 20 percent within four years.