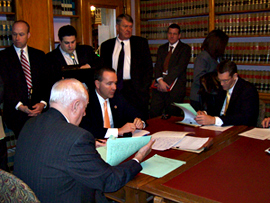 A Senate subcommittee has given the first approval to legalizing internet poker in Iowa.

A bill to legalize on-line poker in Iowa has survived round one in the Iowa Senate.

If the bill becomes law, the 21 state-licensed casinos would be able to run poker games for registered customers who then could play and legally wager online.

Senator Jeff Danielson, a Democrat from Cedar Falls, today said the bill would provide some protection to Iowans who are getting bilked now in some on-line poker games.

“Both the technology and the cultural acceptance has gotten ahead of our own ability to have a decent policy for what to do about it,” Danielson said.

The states of Nevada, Delaware and New Jersey have legalized on-line poker play. Danielson notes the bill that cleared an Iowa Senate subcommittee today is identical to one that passed the Senate on a 29 to 20 vote last year. The Republican-led House never considered the legislation.

“To do nothing, by default, I think is both wrong morally because it puts Iowans in a position they shouldn’t be in,” Danielson said, “but also it’s wrong when you look at the economics of what’s occurring in this area.”

Supporters of the bill say the on-line poker playing would be limited to registered casino customers — and no one under 21 can gamble at an Iowa casino, but Senator Randy Feenstra, a Republican from Hull, expressed doubts.

“How are we going to stop a 21-year-old giving the password to his 14-year-old brother or sister to play the game?” Feenstra asked.

Casinos say there is GPS software available to ensure the computer being used to play poker is physically within the state’s borders. Iowa Catholic Conference executive director Tom Chapman said the social costs of expanding state-sanctioned gambling beyond the 21 casinos are troubling.

“Really making that quantum leap from those 21 locations to every household in the state and beyond,” Chapman said. “And I don’t think we should underestimate what that might mean for households. That’s a big difference.”

“If the state really is in this to generate revenue, I would strong urge that we look at sports betting and take on the NFL and the NCAA on a state’s rights basis and could win that ultimately,” Thornton said.

Senator Danielson was quick to shoot down that idea.

“This bill is not about revenue, not about growing government,” Danielson said. “This bill is about protecting Iowa consumers who are in legal limbo now because of inaction by the feds.”

Senator Feenstra  immediately responded: “I understand that you’re saying it’s not about revenue, but it will generate a tremendous amount of revenue. It just begs the question: Is it like the red light cameras? You know (people say of the cameras): ‘It’s all about safety.’ It generates a lot of revenue.”

A financial analysis issued last year by the Legislative Services Agency estimated the state’s “take” in taxes from the casinos could rise by up to $13 million if internet poker is legalized. Republican Governor Terry Branstad has said he is open to considering the idea, but the top Republican in the Iowa House has said it is not a priority issue.