You are here: Home / Health / Medicine / More talk, some action on Medicaid expansion 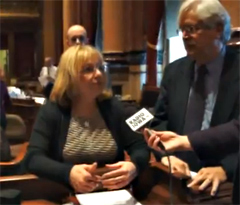 “I think one of the most significant things is that folks who know more about Medicaid expansion, as they learn more, as they get more of the facts, they tend to lean toward support it,” Scott McIntyre, a spokesman for the Iowa Hospital Association, told Radio Iowa.

Republican Governor Terry Branstad has been resisting the move. Branstad says Iowa can’t count on the federal government’s promise to pick up the entire tab for getting up to 150,000 more Iowans enrolled in Medicaid.

Iowa hospital executives met with Branstad yesterday to urge him to change his mind, and then Branstad met privately with three Democratic senators. Senate President Pam Jochum, a Democrat from Dubuque, said the meeting was “a good start.”

“We are just going to continue working to make sure that 150,000 more Iowans have health insurance,” Jochum told reporters after the meeting.

The governor wants to expand another program called “Iowa Care” and require low-income Iowans to pay at least a small premium. Senator Jack Hatch, a Democrat from Des Moines, was part of the group that met with Branstad and the governor’s top health care advisors.

“They have a vague concept of what they want, but in our conversation with them, they were unable to answer some questions that are pretty basic to how we develop a program, how to work with the feds and how to develop a new health care system to the state of Iowa,” Hatch told reporters.

Senator Amanda Ragan, a Democrat from Mason City, called the meeting with Branstad a “first step.”

“We’ve got an opportunity to move forward in the senate,” Ragan told reporters. “And while he’s developing his plan, we’re still looking out for the 150,000 Iowans who are in need of health care.”

Also Wednesday afternoon, Democrats on a senate committee approved their plan to take the federal money and extend Medicaid coverage to as many as 150,000 uninsured Iowans. All the Republicans on the committee voted against it. The Iowa Hospital Association’s survey found 47 percent of Republicans supported expanding Medicaid after they were told it would prevent losing the state’s share of federal funds to other states.  Iowa hospitals provided a billion dollars worth of charity care last year — picking up the tab for uninsured patients.

“We were counting on Medicaid expansion to get more people insured and to start putting a dent in those numbers,” McIntyre said.

The governor’s spokesman said in a written statement that Branstad continues to believe putting more Iowans in the Medicaid system “does not lead to better health care outcomes.” Tim Albrecht, Branstad’s communications director, said the governor will continue to have a “dialogue” with legislators to try to “find ways to offer better health care for Iowans.”