You are here: Home / News / February pretty average on the weather charts 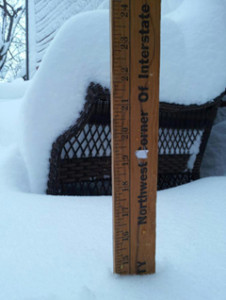 This yardstick shows a 14 inch snowfall in State Center..

February ended on a snowy note across sections of Iowa, and that helped make the month overall a little wetter than normal. State climatologist Harry Hillaker keeps track of the precipitation.

“Statewide about a quarter inch more than usual, nothing really greatly out of the ordinary as far as totals go…basically about the southeast half of the state has an unusually wet February. Unfortunately parts of west-central and southwest Iowa in particular were on the dry side of normal there,” Hillaker says.

Temperature readings didn’t show anything that stood out. Hillaker says he doesn’t have all the numbers in yet, but things will be very close to normal.

Hillaker says the snow late in February turned around what had been a lack of the white stuff for most of this winter. One storm dumped a statewide average of just over five inches of snow, while another left an average of four inches across the state.