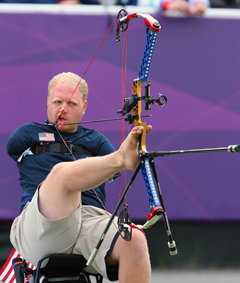 Some 20,000 deer hunters from across the region will be in central Iowa this weekend, hunting for new gear and to boost their skills.

The Iowa Deer Classic opens today in Des Moines, featuring more than 300 exhibitors and a range of seminars and demonstrations.

“First is the Big Buck Contest and we’re looking at 300 to 400 deer just from Iowa hunters that come in here,” Bunge says.

“That in itself is a premiere antler display. If you took that to any other state, they wouldn’t believe it. We also have the Hall of Fame display.” That features at least another hundred trophy buck heads from previous Big Buck competitions.

One of this year’s special guests is Matt Stutzman of Fairfield, who’s known as “The Armless Archer.” Bunge says Stutzman won the silver medal for the U.S. team in the 2012 Paralympic Games in London and he’s a long-range archery world record holder.

“He shoots with his feet and his mouth, nobody helps him,” Bunge says. “In the Olympics, he was competing against guys with arms, sitting in wheelchairs. He’s quite a shot and he’ll give a neat and funny, inspirational story on stage and then he’ll show people how he shoots.”