You are here: Home / News / Governor’s son likely to be confirmed to state post 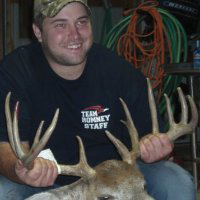 The chairman of a key senate committee sees no hurdles in confirming Republican Governor Terry Branstad’s son to be a member of the Iowa Natural Resources Commission.

Senator Dick Dearden, a Democrat from Des Moines, is chairman of the Senate Natural Resources Committee.

“To have somebody young on the commission really makes a difference to me,” Dearden says. “Too many times it’s people who are too old to be there, maybe. They’re my age and just to have a young perspective on there, I think’s excellent.”

Dearden describes the governor’s son as a “nice young man.”  “He’s an avid hunter and I think we really need that,” Dearden says.

Senator Rob Hogg, a Democrat from Cedar Rapids, is another member of the senate committee that will review Marcus Branstad’s nomination. Hogg notes it’s an unpaid position within state government.

“I don’t think he should be necessarily precluded from serving because he’s the governor’s son,” Hogg says, adding: “You know, if he gets on there, maybe he’d help Governor Branstad finally do something for natural resources.”

Senator Brian Schoenjahn, a Democrat from Arlington, is a member of the Senate Natural Resources Committee, too. Schoenjahn says Marcus Branstad “would be good” for the state commission.

“I think he would add some knowledge,” Schoenjahn says. “He is a hunter, my understanding is — an avid outdoorsman.”

The governor says he “personally” talked with the top Democrat in the Senate and Senator Gronstal “has no problem” with Marcus Branstad serving in this post.

“My son, Marcus, loves to hunt, loves to fish. He is a strong advocate for the natural resources,” Terry Branstad says. “He also has a lot of friends on both sides of the aisle and he wanted to be appointed two years ago, and I told him, ‘No.'”

Marcus has a hunting license “for every species” that’s available according to his father.

“He’s got eight deer stands in three counties. He’s a bow hunter. He hunts with a shot gun and he does it with a muzzleloader. He hunts ducks and geese. He fishes. He ice fishes,” the governor says. “I mean, I don’t know of anybody that’s more of a sportsman or follows these things closer than Marcus Branstad, so just because he’s my son should not prevent him from serving as a volunteer on this important commission.”