You are here: Home / Fires/Accidents/Disasters / I-80 bridge in Adair County damaged by dump truck 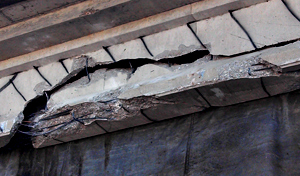 Damage to I-80 bridge caused by a dump truck.

A bridge on Interstate 80 in Adair County sustained extensive damage early this morning in an accident involving a dump truck. The Iowa State Patrol says 62-year old Duane Nelson of Casey, forgot to lower the box on a 1991 Mack dump truck registered to Schildberg Construction, in Greenfield.

As the vehicle was traveling southbound on Adair County Road N-77 south of Casey, the truck box hit the westbound I-80 bridge support beam. The impact tore the box section off of the truck, but it became wedged against the support beam at the point of impact.

A DOT. crewman said the same dump truck also took out a couple of power lines as it was leaving Casey. The accident happened at around 5:40 a.m. The Patrol cited Nelson for driving a vehicle with excessive height.

No injuries were reported.